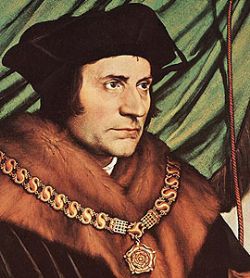 The Knights of Columbus was founded by Reverend Father Michael McGivney, and chartered on March 29th 1882. Less than forty years later, on September 12th, 1920, St. Thomas More council, then known as Westwood Council 2188 received its charter.

George McManus was elected and became its first Grand Knight. The first elected Chancellor was William E. Finnegan whose membership in the Knights of Columbus dated back to 1898, and he transferred from his Brooklyn council in 1920.The first chaplain was Father Thomas F. O’Donnell. Father O’Donnell was a guiding spirit in the first days of the Council. It was he who urged that the council have its own meeting place and clubhouse. A store on Washington Avenue, opposite the park was rented and turned into the Council Chamber and Clubhouse. In 1925, the Council voted to build its own clubhouse and the property at the corner of First and Park Avenues was acquired, and our first clubhouse was opened in 1926. In 1934, the Council gave up its clubhouse and move its meeting place to St. Andrews School. The council in 1945 gave serious consideration to the new complexion of the organization, with members hailing from several towns from Montvale to New Milford, and decided that the provincial name Westwood Council was no longer suitable and renamed it St. Thomas More.

Many new councils were started in surrounding towns such as: Closter, Park Ridge, Oradell, Washington Township, River Edge, Emerson, etc. and transfers sent our membership on a downward trend. In the early 1950’s the Edelweiss House property in River Vale (now known as the Florentine Garden restaurant) was purchased and became our second clubhouse. After a constant struggle of making ends meet, the property was sold in 1962 and meetings were held in the Old Hook Inn (Sirloin Room). After a year of gathering at the Westwood American Legion, the Emerson Borough Hall was utilized and a year later we found ourselves back at St. Andrew’s School.

The Columbian Club Officers and Trustees purchased property on Old Hood Road that is now the 400 building. It was the ingenuity of Harold Sunden and the officers of the Columbian club that the land was bought and eventually sold, which enabled them to purchase and build our present Hall in 1972.

The Council has a membership of over two-hundred and fifty men. St Thomas More is a thriving, very active council and has a variety of programs and activities in which the membership participates, religiously, fraternally, and charitably.

Charitable activities include: Collecting for the Developmentally Disabled, Cook and Serve for the hungry in Newark and the Fellowship House in Englewood, Gift Certificates to needy families, Christmas party for children and families. Luncheons for the veterans, collecting warm clothes for the needy, and helping with financial or manpower during catastrophic events.

Youth activities include: Children’s Christmas Party, basketball free-throw tournament, Recognition of Eagle Scouts, as well as outstanding altar servers. A scholastic fund for distribution of up to $1000 to a senior HS student that will be attending an accredited college.

The council has received many awards over the years, most recently the Community Service Award, from the State of NJ Council, and is a seven-time winner of the coveted Star-Council award, four of those occurring in the last five years.

In 1997, St. Thomas More started our own first-degree team, and degrees are held on the second Tuesday of each month. St. Thomas More council has installed over seven-hundred men into the Knights of Columbus. Also in 1997, we started feeding the hungry at St. Patrick’s in Newark. The shopping and cooking, as well as serving of the food is generously performed by our Brother Knights. We feed upwards of 190 people every time we go. We have also instituted the use of Memorial Card donations to fund this worthy cause. More recently, we instituted a program to honor our Veterans in the Veterans Home with a Luncheon.