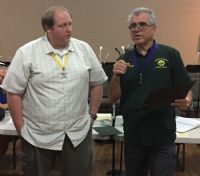 Sir Knight Mason Stevenson Knight of the Month August 2018 Mason became a Knight of Columbus in March of 2001 and joined the Patriotic 4th Degree in October of 2001. Mason transferred to council 15779 in December of 2017 and quickly jumped in with both feet and offered his expertise to assist our council. Mason is part of our website team and has recently been elected to the position of scribe. Mason has 2 wonderful daughters Astryd and Merida

Sir Juan Velez Family of the Month August 2018 Juan became a Knight of Columbus in September of 2017 and quickly joined the ranks of Patriotic 4th Degree in November of the same year. Juan is married to his wonderful wife Linda and together they have 2 children, Santiago and Lucy Juan has quickly become an active member of our council, Juan is part of the website development team, he is the chair person for this year’s soccer challenge and has recently been elected to the position of Outside Guard. Juan and Linda are both Catechists at St Peter the Apostle. 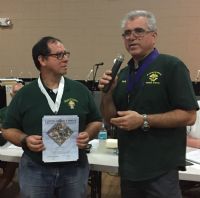