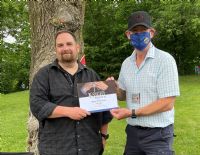 Brother Phil has been a Member of the Knights of Columbus and our council since November 27th, 2013. Brother Phil is a 3rd Degree member and is our Recorder. He has diligently applied himself to this position for the last 6 years. This role is so important to the history of the council, recording what is being discussed, by whom and what was decided. It includes keeping important documents as well. We have never worried about the job being done by Brother Phil as his strong moral character and work ethic have ensured accuracy and the safe-keeping of our meetings and documents. Brother Phil has not only taken on the role of Recorder but also has been active in the community. He has played the bugle at Remembrance Day ceremonies held at the Clarence-Rockland Cenotaph. He also plays in the Rockland Band. Brother Phil and his wife ‘Lady’ Kelly have three children, with the most wonderful names: Quinton, Harmony and Phoenix! Brother Phil and his family attend St. Faustina Parish. Congratulations Brother Phil for your hard work in our council, parish and community. You have been an important part of our council and ensure that we continue to be ‘the little council that could!’ Collectively we thank you for your six years of service to our executive council and look forward to working with you during our in-person activities. 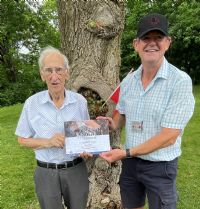 Brother Barry has been a Member of the Knights of Columbus since May 1st, 1964. That makes 57 years as a Knight! He was a charter member of Council 5558 and served in many positions including Advocate and the Realty Club but “never Chaplain” lol, as he told me. He was the Chairman of the Social Committee organizing many things including sleigh rides. He worked at Council Bingos and earned Council 5558 much needed funds. He is presently an Honorary Life Member and has earned his 3rd Degree. He transferred into our council in 2012 and has served in our Executive Council for five years as Warden (3 years) and Guard (2 years). He has been active in many council functions including BBQ’s, the Outdoor Masses, Soccer Tournaments, Blood Donor Clinics, the Soccer Challenge and BBFT’s to name a few. Brother Barry has regularly attended our Executive Council and Business Meetings and financially supported our council. During those 57 years as a Knight, Brother Barry was also a Doctor of Pediatrics and an Associate Professor at the University of Ottawa. He treated hundreds of children and ensured they had a chance at the best of health and life. I have borrowed a summary on Dr. Barrett Adams from the Ottawa University website. It incredibly reads as follows: "Dr. Barry Adams graduated from medical school at the University of Ottawa in 1959. He then did a rotating internship and a year of internal medicine followed by a year of pathology at St. John's Hospital in Detroit, Michigan. He returned to Ottawa in 1963, completing two years of pediatric residency and a one-year fellowship covering the neonatal service at the Ottawa Hospital – General Campus. Dr. Adams then did a research fellowship at the Hospital for Sick Children in the neonatal service. He commenced his general community pediatric practice in Ottawa in January 1966. During his years of practice in Ottawa, he was also clinical head of the neonatal service at The Ottawa Hospital. He was first president of the medical staff when CHEO opened and served as chairman of the MAC at CHEO on two separate occasions. He also served the medical profession as representative to the Ontario Medical Association, College of Physicians of Surgeons of Ontario, the Canadian Pediatric Society, the University of Ottawa Medical Alumni Association, eventually being president of each. Dr. Adams sat on the MCC, RC PS(C), CMA, Ottawa Academy of Medicine, Ottawa Health Science Centre Inc., as representative of other bodies. Over the years, Dr. Adams has contributed to CHEO ward coverage and teaching, and provided office-based supervision and teaching of medical students. He retired from the general pediatric community practice in June 2014, but continues to carry on a consulting practice." What this summary doesn’t include is that Brother Barry also played football for the Ottawa GG’s back in 1954. With Brother Barry’s permission, I have included the website address of an article written about him by the University of Ottawa, Faculty of Medicine in 2019: https://med.uottawa.ca/en/news/85-uottawa-still-his-home-turf Congratulations Brother Barry for doing so many good things for others. You have been an important reason why our council has been so successful over the years. Collectively we thank you for your years of service to our executive council, parish and community. Thank you as well for making a difference in the health of so many children, bettering their lives and families and for teaching others how best to medically treat others and always with an abundance of compassion. Brother Barry had the great fortune to be married to his wife Lady Elizabeth, who passed away a short 5 years ago. We look forward to working with Brother Barry again in our council events. Brother Barry wanted to emphasize that you can be a Knight and have a profession and family at the same time. It is evident that this all boils down to his devotion to God, his family, his profession and the Knights of Columbus. 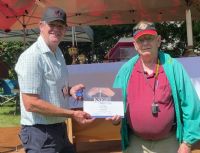 SK Lloyd has been a Member of the Knights of Columbus since February 01st, 1990 (31 years). He is a charter member of this council (2002) and was its first Grand Knight. He is an Honorary Life Member and a 4th Degree Knight in the Bishop John Beahen Assembly 2230 in Ottawa for the past 15 years. He has served many positions on our council including Grand Knight, Financial Secretary, Advocate, Retention Chairman, Insurance Promotion, Health Secretary, Recruitment Committee and 50/50 Draw Chairman. He has also been involved with meetings, activities and positions within the Fourth Degree. He has attended many special occasions in his 4th Degree regalia representing the Assembly and our council. SK Lloyd has been active in our council functions whether it be at the Annual Garage Sale, the Soccer Fest in August, the Soccer Challenge or Basketball Free Throw at St. Pat’s and St. FX, the Blood Donor Clinics, numerous K of C or parish dinners, helping us conduct an audit, preparing and serving breakfasts, dinners, BBQing, and so many other Knights activities. A quote by DeAnne Willis about volunteering is to the point about who SK Lloyd Maier truly is: ‘The heart of a volunteer is never measured in size, but by the depth of commitment to make a difference in the lives of others”. Congratulations SK Lloyd Maier for making a difference in so many lives and being such an important part of our Council. Collectively we thank you for your many years of service to our council, parish and community. We look forward to working with you again! 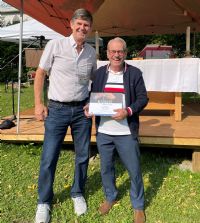 SK Réal has been a Member of the Knights of Columbus since October 1st, 1989. He is a charter member of this council (2002). He is presently an Honorary Life Member and a 4th Degree Knight in the Bishop John Beahen Assembly 2230 in Ottawa. He has served many positions on our council including Grand Knight, Deputy Grand Knight, Trustee, Lecturer, Program Director, Retention Chairman and Recruitment Committee, all of these for several years. SK Réal has attended many special occasions in his 4th Degree regalia representing our council and has also led 4th Degree Knights at these events. SK Réal has been active in our council functions for many years. Whether it be at the Annual Garage Sale, the Soccer Fest in August, the Soccer Challenge or Basketball Free Throw at St. Pat’s and St. FX, the Blood Donor Clinics, numerous K of C or parish dinners, helping us conduct an audit, preparing breakfasts, dinners, BBQing, and so many other Knights activities, SK Réal has been there. He continues to be a shining example to other Knights and embodies the pillars of Unity, Charity and Fraternity. Congratulations SK Réal for doing so many good things for others. You have been a major reason why our council has been so successful over the years. Collectively we thank you for your many years of service to our executive council, parish and community. A special thank you to Lady Colleen who has always supported your efforts as a Knight and been by your side at many events. We look forward to working with SK Réal again in our council events. 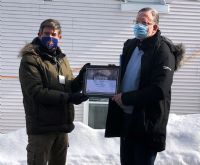 Brother Jerome has been a member of the Knights of Columbus for 42 years. He is an Honorary Member and earned his 3rd Degree in 1979. He is responsible for and has devoted himself to the Ted Nunan Divine Mercy Cenacle for many years. As a musician and singer possessing a wonderful voice, he has given so much of his time to singing in the Church choir(s) and harmonizing with other talented singers. He is technically proficient in setting up and managing not only sound equipment but also video and audio requirements wherever and whenever needed including Masses and YouTube live streaming. He is responsible for communications on Flocknote and for the Parish. He is a member of Parish Council as well as the Mission Advancement Team. He assisted in the planning and building of Father Gerard's Covid Cabin and was involved in the set-up and take-down at the outdoor Masses. Brother Jerome has participated in many Knights activities over the years and community events as well. He is a respected and thoughtful person who people look to for his insight on various matters. In 2020, Brother Jerome gave 656 hours of his time volunteering for his Church, council and community. Congratulations Jerome on being the Knight of the Month for February 2021. It is so well deserved. 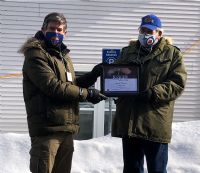 Sir Knight Harold Rideout, has been a member of our council for 8 years and actively participates in many council events. It was recognized in the month of January 2021, that Brother Harold attends all three Sunday morning drive-in Masses "each week" at St. Faustina Parish and provides parking control for all those driving to the Mass. He also holds the collection basket after Mass receiving necessary funds for the Church and its important activities. He also receives a communion host from Father Gerard to bring home and serve it to his wife Ellie. Through cold or snow, Brother Harold has been there tending to his mobile flock of parishioners and non-parishioners. Thank you, Harold, for being so faithful and diligent to the task and ensuring everyone gets in and leaves safely as well. Congratulations for being the Knight of the Month for January 2021. 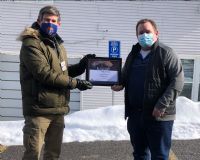 Brother Vince was instrumental in the success of our Council's participation in the Clarence-Rockland 2020 Drive-Thru Christmas Parade of Lights. Vince drove his personal vehicle to tow the float to the Hockey Academy parking lot where the float was parked along with 24 other entries. Due to the Covid-19 pandemic this year's event was "drive-through" only, with no participants allowed on or around the floats. The floats were required to remain in position for over 2 hours as onlookers viewed the parade. Brother Vince was accompanied by his wife Angela and daughter Jasmine, who stayed in their truck and waved to all the spectators. The event was a tremendous success with an incredible number of vehicles attending. The theme of the Council float was "Keeping Christ in Christmas". The event provided excellent exposure for Council 13049 and Brother Vince deserves full credit for his valuable contribution this year and in many previous years, that make this event a success. Congratulations for being the Knight of the Month for December 2020.

Currently there are no Families of the Month