Mike is a stalwart Member involved in all phases of Church activity.

Past Grand Knight was honored for his contributions to the Council.

Our Chaplain and Parish Parochial Vicar Knight of the Money

Ken is the Treasurer and a PGK. 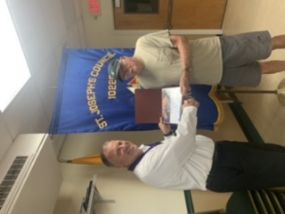 Jack was instrumental in the movement of donated pews for the church basement reconstruction. 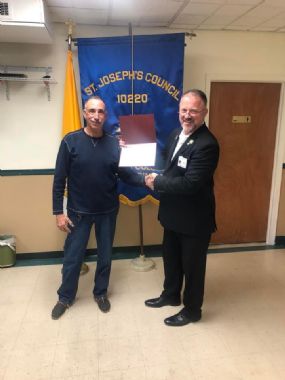 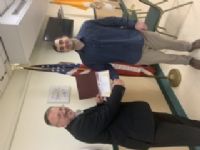 Knight of the month Greg Gallo has distinguished himself in his first year as a member. 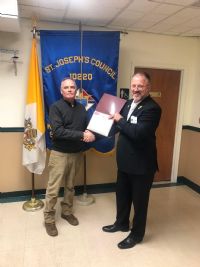 PGK GLENN ORGANIZED OUR SUPER RAFFLE. MONTHS OF HARD WORK. HE IS THE KNIGHT OF THE MONTH. SPECIAL MENTION TO GREG GALLO WHO WAS OUR SANTA CLAUS THIS YEAR AT THE SANTA BREAKFAST. GREG IS A NEW MEMBER AND VERY ACTIVE. 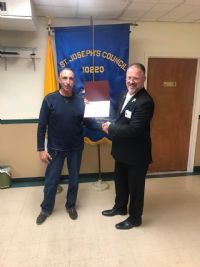 Joe is a consummate salesman and leads the Council in raffle sales. He is the Knight of the month. 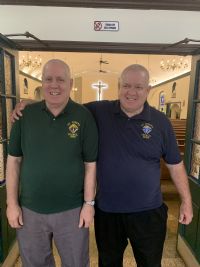 Dan and Jim Norman were selected to be the Knights of the Month for their work in cleaning the kitchen after 20 months of idle kitchen work for our October Breakfast. Dan and Jim also showed up the Saturday after the Breakfast to do the Street Clean with Bernie and Ken. Congratulations Jim and Dan. 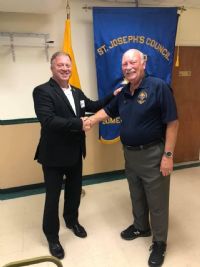 Mike is our September Grand Knight an active member who heads of the parish Columbus Day Golf Tournament with Sir Knight Tony Cannata and other volunteers. 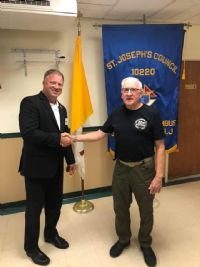 Ray our member recruitment Chairman has been working diligently to get Walmart of Egg Harbor Township to agree to allow the Council to have a fund raiser outside of their facility. Walmart has approved the Council request and it will be implemented when the Company approves these activities.

Chancellor Blankenbuehler was awarded the Knight of the Month for December

Jerry is awarded the October award for service to the Council 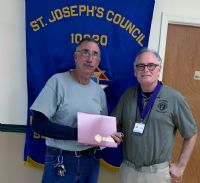 Joe is our Knight of the Month for September. He is a tireless worker for our Council and the best at gathering donations for our programs.

Our Knight of the Month Mike Kunigonis assisted the parish in the reopening the church. Designing the seating system and scheduling our Council members for Saturday and Sunday masses as ushers. Members were also briefed on cleaning methods to utilize after mass.

Kevin was awarded the New Jersey State Council Knight of the Month for May 2020 by District Deputy Christopher Tomasello, JR.

Congratulations to Bernie Griffin our Knight of the Month for December.

Kevin is being honored for his efforts in resuscitating a customer at Harbor Pines Golf Club. Kevin is our Deputy Grand Knight and a credit to our Order. 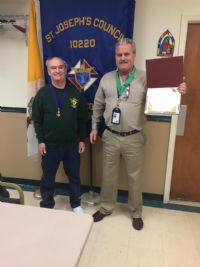 Our Knight of the month was instrumental in selling tickets to fill the theater for the movie UNPLANNED. 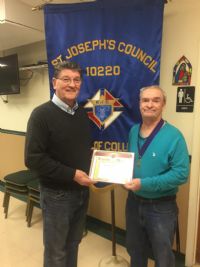 Don as usual does a great job organizing our Super Bowl Sub sale each year. 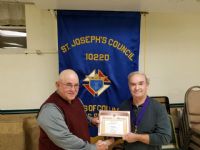 Alan displayed his skills as Santa Claus during our December Breakfast with Santa.

Rafael distributed turkeys to needy residents of Atlantic City, NJ prior to Thanksgiving. Rafael has continually put charity to his community in his endeavors as owner of City Wide Towing.

Our Knight for the month of August Joe Jacobs raised significant donations in our American Flag giveaway at the Atlantic City Air Show. Joe's untiring work on the boardwalk also helped in our sales of the Thunderbird Gear. 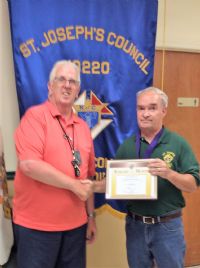 Congratulation to our January Knight of the Month Youth Chairman, Dominic Yacovelli.

Dennis started out as our Santa Claus at the December Breakfast but passed the banner to Alan Parmlee. Dennis has always been a volunteer and outstanding Knight of Columbus

Tom has been our Sunday breakfast cook for the past year. He has done a great job for the Council.

Mike has been integral member of the Parish Team in the success of the Annual Columbus Day Golf Tournament raising thousands of dollars to support St. Joseph's Parish. Mike is an involved member Past Grand Knight and Color Color Corps Commander of Assembly 662. 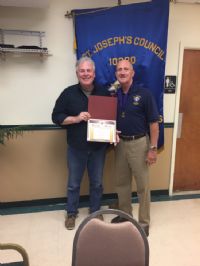 Our Knight of the Month Jim Armstrong has been with the Council since December 2016 having advanced to the third degree of full knighthood. Jim has already proved to be a credit to our council with his dedication to our programs. Congratulations Jim. 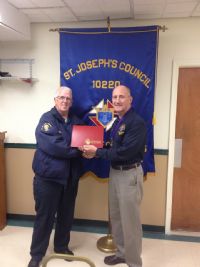 Our Trustee Ray Norman shows again why he is a valuable member of the Council. 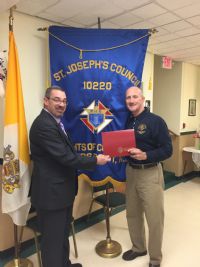 Our Knight of the Month for November is Chris Lepre. Chris has maintained the kitchen as well as performing needed work around the church over the last few years. He is an invaluable member of our Council and we will miss him as he ventures to Philadelphia to live. Good Luck Chris.

Dan is recognized for his contributions to our Council at Saturdays 5:30pm mass and tending to the cleaning of pots, pans, utensils and miscellaneous items at each Sunday breakfast held during the year. We should call him "Dan the dishpan Man".

Glenn our First Year Trustee has been the rain maker for our annual Atlantic City Air Show event. Glenn works tirelessly for the Council. 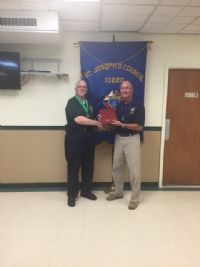 Knight of the Month Ray Norman continues to devote his time to our Council. Congratulations Ray.

Ray is a hard working doer for the Council.

Knight Jamie Mazzara is always available to assist our Council.

Ray is our Knight of the Month. He has worked to fund the Feed The Needy Program which this year is being run by Bud Hanlin. Ray is a tireless worker always involved in Council activities and willing to what is necessary for success. He is one of a kind.

Mike along with Joe Craddock and Tony Cannata were instrumental in the success of the Councils sponsorship of the Parish Columbus Day Open on October 13. Mike is a Past Grand Knight and tireless worker for the Knights And Parish.

Mike was instrumental in the success of the Parish Golf Tournament. He is a tireless worker for the Council, Assembly and Parish

Bernie Griffin is our Knight of The Month for September. He has shown true volunteerism by placing himself at all the events in September including the breakfast and three donut and coffee weekends. Coming in early and setting up.

Kevin Bradberry and family have been chosen by the State Council Knights of Columbus for their dedication to the Right to Life Movement and family values for the Month of May 2020. Kevin is pictured with District Deputy Christopher Tomasello, Jr. 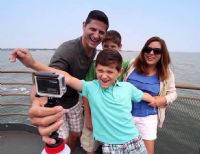 The Yacovelli family is our July Family Of the Month. Dominic is an active member of our Council and both he and his family support our Church and School.