2nd Thursday of the month at 7pm

4th Tuesday of the month at 7pm 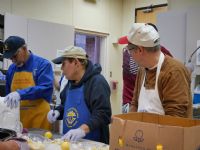 Knights of Columbus Council 8494 works closely with Mary Queen Catholic Church and the Friendswood community by providing funds, resourcefulness, as well as manpower for various projects. Further, our members are active participants in the parish and Pro-Life activities.

Mary Queen council, Council 8494, of the Knights of Columbus was charted on November 10, 1983, in Friendswood, Texas, with 71 Chartered Members.

Until July 1998, we met Mary Queen Catholic Church in Friendswood. During this period, the Council continuously increased its membership. Initially, we focused on supporting our parish's activities, such as Mother's Day Breakfast or Church Festival. Later, we organized a Lobster Festival in League City Park, for which we imported "live" lobsters from New England and did the boiling at the event. This event was a massive success for a couple of years until the lobsters and shipping became too costly. The Council also borrowed equipment to BBQ and sell briskets, which became very popular. Probably, the most successful activity that the Mary Queen Council still does annually is the Lenten Fish Fry. The proceeds go to Mary Queen Catholic Church, various charity organizations, and the Council Education Scholarship Program.

Early on, we began to outgrow the facilities provided by Mary Queen Catholic Church. Consequently, we formed the Friendswood Columbus Club (FCC) in 1985, which gave us a legal entity that eventually allowed us to move into our own space. Every member of the Council was a member of the FCC.

Once the FCC finished constructing the new Hall, the Mary Queen Council rented the facility in 1998 for its Council meetings, events, and equipment storage. When the FCC sold the property in 2016, we temporarily moved back to the Mary Queen Church.

In 2018, the FCC purchased a property and started the construction of a new building. The new Hall became ready for occupancy in 2020, and our Council has been using the facility ever since.

Mary Queen Council, Council 8494, of the Knights of Columbus, was chartered on November 10, 1983, in Friendswood, Texas, with 71 members. The Council initially met at Mary Queen Church. Since the Council cannot legally own any property nor assets, the Council decided to create a separate asset holding organization.

Therefore, on April 16, 1985, the Mary Queen Council formed a nonprofit corporation named Friendswood Columbus Club, Inc (FCC) to maintain its assets. Ben Malek, Richard Pesek, and Walter Porter signed the charter. All members of Council 8494 were a member of the FCC.

In March 1986, Fr Donald Thomas, Msgr. Dan Shields, Ben Malek, and Walter Porter took a walk on an eleven-acre plot in League City owned by the Diocese of Galveston-Houston. This property had lots of trees and a lot of underbrush at the time.

On March 25, 1986, the Friendswood Columbus Club purchased three acres of land at the back of the eleven-acre plot from Most Reverend Joseph A. Fiorenza, Bishop of Diocese of Galveston-Houston, for the sum of $30,000. In addition, the Bishop gave the FCC a sixty-foot wide ingress-egress easement with the stipulation that the Diocese could access their remaining property.

After the Shanks Survey Company surveyed the land, the FCC applied for a City of League City permit to build a 50'x60' building on our property.

In 1988, the FCC started a building consisting of piers-form-foundation soil-sand-concrete slab and the metal framework. At this time, the expenses were $28,329.

In November 1990, Comerica Bank gave the FCC a loan for $15,000 to continue with the interior of the building. The FCC, via Council 8494, was getting some income from Lobster Fests, a reverse drawing, and other fundraisers. Due to limited funding, the FCC had difficulty making the loan payment, so a Brother, Knight of Council 8494, agreed to pay the $14,000. The FCC made arrangements to repay the Brother Knight over time. The interior work was moving along with walls, sheetrock, acoustic ceiling, some cabinets. During this period, the FCC spent an additional $38,580.

From July 1992 to July 1996, the only transactions were payments to the Diocese, the Brother Knight of $345 per month, tax authorities, electrical and insurance providers.

The Brother Knights of Council 8494 never gave up. As members of the FCC, the Council members kept working hard and hoping that they would finish the Hall soon. Well, with sweat, determination, and, you might say, "guts," on July 7, 1998, the FCC received a beautiful gift, a 3 "x5" green card, from the League City. All the inspectors had cleared the facility, and the FCC achieved "FINAL OCCUPANCY," as stated on the card.

We had a beautiful hall dedication on July 12, 1998, with Rev. Skip Negley, who celebrated Mass and blessed the Hall and surroundings. Approximately 160 people were present to celebrate and enjoy a delicious catered BBQ dinner.

The FCC Hall was the home base of the Mary Queen Council, Council 8494. Some of the activities that occurred at the facility were:

The FCC rented this Hall for various activities until its sale in 2016. After the sale, the Council temporarily went back to Mary Queen Church for its meetings and activities. In 2018, the FCC purchased a new property to build a new facility at 18625 Hastings Rd, Pearland, TX 77581. The location is just outside the city limits of Friendswood, on the corner of Baker Rd (FM 548) and Hastings Friendswood Rd (an extension of FM 2351).

The new facility became available for use and rental by Council 8494 in 2020. It stores all the Council equipment (including BBQ and Fish Fry trailers). In addition, the facility has a kitchen, restrooms, and a large enough room to hold the monthly meetings.