5th Tuesday of the month at TBD

Madison Council 531 celebrated its Golden Jubilee on November 12, 1950.  Most Reverand William P. O'Connor, the first Bishop for the Diocese of Madison was the celebrant of a Pontifical High Mass celebrated at St Raphael Cathedral.

Items of note from the first 50 years:

1900 - 48 Catholic gentlemen and 2 priests met in August of 1900 to organize Council 531
1902 - 30 members of the Council met to form a 4th Degree Assembly
1908 - KCs form the first 20 team bowling league in Madison
1915 - K of C Building Assoc. formed for purpose of acquiring a clubhouse for the members of Council 531
1916 - Purchased building at 21 E Wilson St - first KC headquarters in Madison
1917 - Council members active in the sale of Liberty Bonds, raided $9000 for support of the Knights of Columbus "war huts"
1923 - First Football Banquet for Madison high school players was sponsored by Council 531
1924 - Knights instrumental in organizing the Madison Catholic Assoc. Inc., a non-profit corporation to underwrite the construction of a Catholic Community Center
1925 - "The K of C News", first Council publication was issued (and is going into it's 90th year of continual publication as the Council newsletter in 2014-2015)
1926 - Organized first summer encampment for Madison Catholic boys
1927 - Council 531 undertook a special project to reconstruct Durward's Glen.  Work was completed the following year
1930 - Columbian Squire Circle organized
1935 - Blood donors group of Council 531 was organized
1936 - Knights handled plans and arrangements for Catholic Observance of Wisconsin's Centenary at Camp Randall Stadium
1938 - The present home (in 1950) of Council 531 - Madison's Catholic Community Center - was built
1942 - Council 531 sponsored a major league baseball game - Cubs vs. Madison Blues
1943 - K of C Clubhouse facilities opened to World War II servicemen stationed at Truex Field
1946 - Office of the new Diocese of Madison established at the Catholic Community Center by invitation of the Council
1946 - Council 531 was host to the annual Knights of Columbus State Bowling Tournament 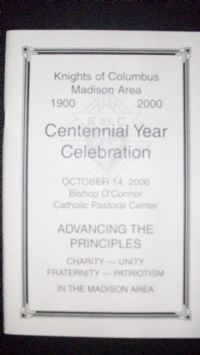 Madison Council 531 was the 3rd Knights of Columbus Council chartered in the State of Wisconsin with a charter date of August 26, 1900 and is the "original" council for the Diocese of Madison.  We are the oldest continual Council in the state with the same council number and have not merged with any other council.

Council 531 was chartered in 1900, drawing members from both Madison and its surrounding communities.  As years went by many members from these adjacent areas went on to form councils in their own hometowns.  Other non-KC Catholic Gentlemen, seeing the workings of the Knights, were likewise inspired to form new councils in their area.  In this sense Council 531 is truly a grandaddy council.

In 1902, only two years after it's chartering 30 members of Council 531 formed a 4th Degree Assembly, renamed in 1946 the Bishop William P. O'Connor Assembly in honor of the then new Madison Diocese first Bishop.

The Council has seen it's membership grow from initial infancy to a massive 1300+ members in the 1950's.  But like a tulip bulb that must split to multiply, it has slowly seen it's membership decrease as other Councils have formed and grown in the Madison area.  Yet the spirit of Council 531 is as strong as ever, and the number of new members admitted each year is slowly increasing, reversing society's trend to not belong.

Installation of new members requires degree teams.  Council 531 has had it's own 1st degree team for virtually it's entire life.  It provided a 2nd degree team for most of the first half of the century and, along with the other District Councils, has since provided members for these last fifty years.  Many members have served at large on 3rd degree teams.

Over it's 100 , years the Council has generated it's share of members dedicated to the spread of the KC spirit: two members have become State Deputies, one member has served as State Treasurer, others as State Advocate, 17 as District Deputies, 2 as State Chaplain, and many others as State Committee persons.  Five members (Tony Nussbaum, Frank Byrne, George Stein, Don Wright and Robert Gevelinger) have received the State Council's highest honor, the coveted Medallion Award.  We are proud to have had Fr Larry Keiffer as our Chaplain for the past 25 years.  We are equally proud to list Bishops William P. O'Connor and George Wirz as Council members.  These three individuals together with all of our past Council Chaplains have instilled us with the Catholic Spirit we have needed to continue our work.

Council 531's history summary wouldn't be complete without a mention of a forgotten accomplishment.  Fr Marquette explored Wisconsin, winding his way through the frontier from Green Bay to the Mississippi.  In the 1950's Council 531 was intimately instrumental in laying out the Fr. Marquette Trail, a road that closely followed the path of Fr. Marquette.  This trail was officially designated a historical trail by the State Legislature.

Much, much more could be written but the flavor of the Council's history cannot but be sensed by what is above.  100 years and looking to the future.