1st Thursday of the month at 7PM 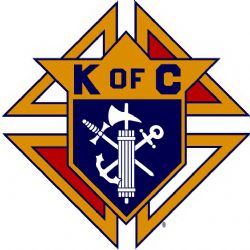 The Knights of Columbus is a Catholic men's fraternal organization dedicated to the virtues of Charity, Unity, Fraternity and Patriotism. Our ordered was found by the Venerable Father Michael J. McGivney in New Haven, Connecticut, on March 29, 1882.

Council 4245 was founded on July 15th, 1956. Since that time, countless Brother Knights have worked long and hard to build our community though supporting our church, our civic community, our youth and our clergy.

Today, our Council stands 200 members strong. We stand united with our priests, deacons, sisters and other clergy to be a visible sign of God’s grace. We are excited and enthusiastic about the future of our church, our organization and our community and promise to continue to work hard to make them better.

The title was used to emphasize Mary's role as a sign of hope and as a guiding star for Christians, especially gentiles, whom the Old Testament Israelites metaphorically referred to as the sea, meaning anyone beyond the "coasts", or, that is to say, sociopolitical, and religious (Mosaic law), borders of Israelite territory. Under this title, the Virgin Mary is believed to intercede as a guide and protector of those who travel or seek their livelihoods on the sea. This aspect of the Virgin has led to Our Lady, Star of the Sea, being named as patroness of the Catholic missions to seafarers, the Apostleship of the Sea, and to many coastal churches being named Stella Maris or Mary, Star of the Sea. This devotion towards Our Lady with this ancient title is popular throughout the Catholic world.

Stella Maris "sea-star" is a name of α Ursae Minoris or Polaris, the "guiding star" (also "lodestar", "ship star", "steering star", etc.) because it has been used for celestial navigation at sea since antiquity. The name is applied to the Virgin Mary in Saint Jerome's Latin translation of the Onomasticon by Eusebius of Caesarea, although this is in fact a misnomer based on a transcription error. The Hebrew name Miryam, meaning drop of the sea, was translated by St Jerome into Stilla Maris, but at some later stage a copyist transcribed this into Stella Maris, and this transcription error became widespread.

Paschasius Radbertus in the ninth century wrote of Mary, Star of the Sea, as a guide to be followed on the way to Christ "lest we capsize amid the storm-tossed waves of the sea." At this time to the plainsong hymn "Ave Maris Stella" ("Hail, Star of the Sea"),became increasingly popular.

Pope Pius XII in his encyclical, Doctor Mellifluus, also quoted Bernard of Clairvaux in saying; Mary ... is interpreted to mean 'Star of the Sea.' This admirably befits the Virgin Mother.. (for) as the ray does not diminish the brightness of the star, so neither did the Child born of her tarnish the beauty of Mary's virginity.

The idea of Mary as a guiding star for seafarers has led to devotion to Our Lady, Star of the Sea in many Catholic coastal and fishing communities. Numerous churches, schools and colleges are dedicated to Stella Maris, Our Lady Star of the Sea, or Mary, Star of the Sea.

Stella Maris Monastery, the foundation house of the Carmelite order was established on Mount Carmel, Israel, in the early thirteenth century. The abbey was destroyed several times, but a re-founded Stella Maris monastery is still considered the headquarters of the order.

Devotions to this title of Mary are found in the popular Catholic Hymn, Hail Queen of Heaven, the Ocean Star and the ancient prayer Ave Maris Stella.