MEMBERSHIP
Our council is in need of new members and you can help out. Just take a look around you, your father, your son, brother, cousin, friend they are all potential members. At church look around at the other Catholic gentlemen attending Mass with you. These are all men just waiting for someone to ask them to become a Knight of Columbus. Ask them to fill out the following and mail it to Membership c/o Knights of Columbus #4186, 191 Market St. Kenilworth, NJ 07033. You can also contact our Membership Director Chris Laurie 908-370-7831.
Name___________________
Address____________________ 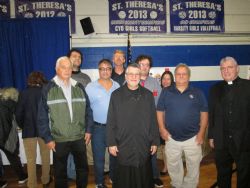 At the recent Ministry Fair held at St. Theresa’s Brother Knights helped with the set up, clean up and cooking for the BBQ. We were able to sign up 14 perspective new members.  It was a good team effort. While there were many Knights there over the two days the picture only covers a few.

-We would like to congratulate the newly elected Officers for the upcoming 2022-2023 Columbian year. 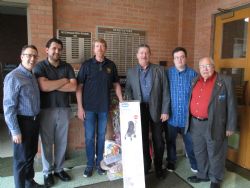 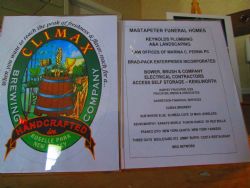 St Theresa Parish Community,
Thanks to all who attended our first Casino Night and made it such as success. Special thanks to our event sponsor, Mastapeter Funeral Homes and our other sponsors for helping under-write the event:
Reynolds Plumbing
A&A Landscaping
Law Offices of Marina C. Perna PC
Brad-Pak
Bower Brush
Access Self Storage
Fruchter & Associates
Garretson Financial
Climax Brewery
Sub Where Else
Thanks to those companies donating items for our tricky tray:
Karate World
Fusion Dance
Reynolds Plumbing
Law Offices of Marina C Perna PC
Three Guys
Boulevard 572
Costas Restaurant
Jimmy Buffs
DiMaio Jewelers
Kenilworth Council #4186
This fundraising will help our Council continue its important work in the community.

For more information on how to become a Knight, contact Chris Laurie, membership chair.

Since we ended our newsletter a few years ago the only way we can stay in contact with our members is through our e-mail list. We are constantly updating the list, if you are not receiving our e-mails please send us your e-mail address at Kofc4186@comcast.net or call Pat Leary 908-241-4691 and leave a message. Since we send out a mass e-mail you may have to make sure our e-mail can be accepted and not go to your spam file.

We will also try to keep updating the website to keep you informed of regular council business.

If you would like to pay your council dues you may do so now.

Please make your check payable to “Knights of Columbus #4186”