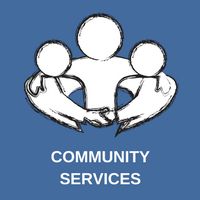 Below you will find a list of community services our council participates in.

Our council provides a ride to Mass to anyone in the community that would like to come to Mass but does not have a way to get there. It is a free service offered to anyone in need regardless of the reason. If you or someone you know has a need for this service, please contact us.

Sign up to be a driver for Mass Transit. A primary and back-up are needed each Sunday.

The members of our council are involved in a few of the soup kitchens in the area. We have a team that provides, prepares, delivers and serves meals a couple of times a year at the Missionary Sisters of Charity in Norristown, PA. We provide, prepare and serve a meal once a month at St. Mary's Franciscan Shelter in Phoenixville. We also have a few members that help out occasionally at God's Kitchen in Pottstown. If you could like to help us with our soup kitchen efforts, please let us know.

On the last Saturday of each month, a volunteer from our Council prepares and delivers a meal to the St. Mary's Franciscan Shelter, in Phoenixville. The menu is up to the volunteer. The meal must feed 12 -20 people. An actual number is provided a few days before the delivery. For details or to sign up see Dave Tulli divadt41@gmail.com

Our council welcomes new members into our parish with a gift of a red rose and white rosary beads when they are baptized.

To volunteer to present families with a Roses for Baptism sacramental gift contact Dennis Wright at wright_9@verizon.net

Two times a year (Spring and Winter), volunteers go out and clean up trash from a two-mile stretch of Neiffer Road that includes the area next to the Church.  It only takes about one hour and all supplies (bags, gloves, vests etc.) are provided.  Families are encouraged to participate as long as children are supervised and mindful of traffic.

For more information or to volunteer for our next clean up contact Dominik Gorshe at gorshe107@yahoo.com 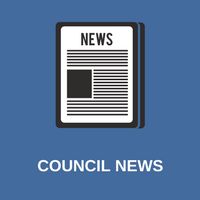 Below you will find a list of our council news. 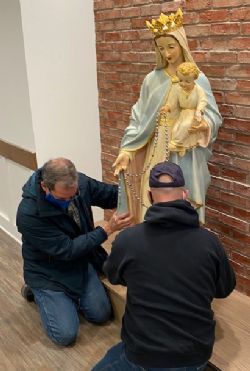 The statue is believed to be almost 100 years old and originally was featured in St. Peter Church in Pottstown, which merged with St. Clare’s in Linfield to become (Blessed) St. Teresa of Calcutta Parish in 2006. The statue had been used at St. Teresa’s during the parish’s development but had been in storage for nine years.

St. Teresa of Calcutta Parish provides pastoral care for the Arcadia at Limerick Pointe community. The Knights of Columbus knew how important this statue of the Blessed Mother would be for the Arcadia community and they were very grateful to place it in a beautiful niche outside of the facility’s chapel. 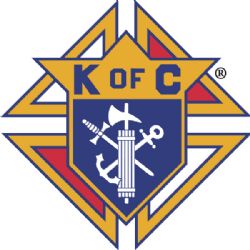 What type of services/events do the Knights of Columbus participate in?

CLICK HERE to learn about the various events the Knights support throughout the year.

Click Here to learn the roles of your Council Officers

CLICK HERE to learn about the Awards that the Council can earn each year.

CLICK HERE to read the Faith in Action Guidebook

Learn about Faith in Action within the The Knights of Columbus

History of the Knights of Columbus

Read the History of our Organization. Courtesy of kofc.org