12/18/21 - Our participants in the annual Wreaths Across America event in Wilmington.

10/13/21 - GK Guy and PGK Bob accept Columbian Award, given to those councils who exhibit, through their programs and events, focus on Culture of Life, Youth, Family, the Council, service to the Community and the Church. 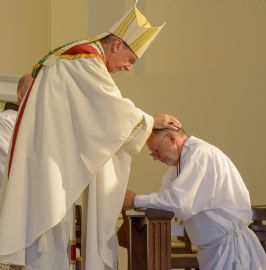 06/29/20 - Our Council is proud to announce that one of our own - Sir Knight Rick Autry - has been ordained as a Permanent Deacon of the Catholic Church. Rick is pictured here with Bishop Luis Rafael Zarama.

01/18/20 - Our contingent at the annual Raleigh March for Life. That's Knight Rick Autry (in vestments) who served as Acolyte during the Mass.

07/20/19 - Our Assembly provided an honor guard for the Bishop's installation of our new pastor, Father Thanh Nguyen.

07/20/19 - Our Assembly provided an honor guard for the Bishop's installation of our new pastor, Father Thanh Nguyen.

Who We Are
We as members of the Sacred Heart Council focus on developing programs that best serve the needs of our local community. All the good works are driven by our four core principles of charity, unity, fraternity, and patriotism. We are a band of brothers, more than 240 strong, doing good in the service of God, our parish, and our neighbors. If interested in joining, or finding out more information, please contact Pat Naughton at pnaughton09@gmail.com.

There are four degrees of membership in the Knights. The first three degrees represent the values of Charity, Unity, and Fraternity.  The Fourth Degree is dedicated to the virtue of Patriotism, fostering that spirit in all members and the community at large. The Fourth Degree is the one most familiar to the public, identified by distinctive regalia and their participation in color corps and honor guards. They work tirelessly in their outreach to our nation's military - active, infirmed, or retired. The Fourth Degree is a position of prestige and something for which all Knights should strive.

The Truth about Abortion and Women's Health

The USCCB has promulgated a new, one-page resource, “The Truth About Abortion and Women’s Health”,  dispelling the many myths currently circulating which claim abortion restrictions will limit women’s access to healthcare.  They hope this resource will help you to combat these lies about pro-life legislation during Respect Life Month and a heated election cycle.

Our Council is proud to announce that it has awarded eight $1,000 scholarships to South Brunswick High School seniors, and for the first time, a former SBHS student pursuing graduate studies.. The deserving recipients were Kathleen Callahan, Ford Disbrow, Christian Haagblom, Noah Harrell, Grace Helwig, Lexi Jones, Christina Mahon and Emma Stone. (see photo in slide show). The presentations to the seniors was made by Director Rob Kirwan at the SBHS Awards Night on May 17, 2022.

Our Council’s Fourth Degree Assembly is proud to announce that it has awarded two $1,000 scholarships to South Brunswick High School JROTC seniors. The worthy recipients are Cadets Triston Leonard and Tommy Bost.

Cadet Leonard had a class rank of 26, with a GPA of 3.9. JROTC achievements include Cadet Battalion Command Sergeant Major, Captain of the Drill Team, Color Guard Commander and Co-Captain of the Rifle Team. He was awarded the Marine Corps Leadership Award, Superior Cadet Award and First Place honors in the Whiteville Drill Competition. He will be attending East Carolina University, majoring in biology in the pre-med program. Upon graduation, he hopes to attend medical school and is planning on serving in the United States Army as a doctor.

Cadet Bost had a class rank of 9, with a GPA of 4.4. JROTC Achievements include Cadet Battalion Captain, Raider Team Leader, three-year JROTC Scholarship, and has been awarded 19 ribbons, 2 medals, 2 Bronze Lamps, 2 Silver Lamps and Cyber Patriot Team member. He will be attending UNC-Charlotte, aiming for a degree in Business and a ROTC commission in the United States Army.

Our Council is proud to announce that one of our own - Sir Knight Rick Autry - has been ordained as a Permanent Deacon of the Catholic Church.  Congratulations to Rick and his wife Debi.

On June 29, 2020, Bishop Luis Rafael Zarama conferred the sacrament of holy orders to the diaconate for the first time since becoming bishop of Raleigh in 2017. And the class of 2020 is the first permanent diaconate ordination in the new cathedral, Holy Name of Jesus. The Mass was private for family and essential personnel but was streamed live and is available to watch on YouTube.

You can read the full story on the ordination that was published in the Diocese magazine by clicking here.

All Other News and Announcements

For a complete list of informative news, please visit our News and Announcements page.

2nd Wednesday of the month at Sacred Heart Church

1st Tuesday of the month at Sacred Heart Church