No events are scheduled within the next 60 days.

History of the Knights of Columbus in the Lehigh Valley

The Knights of Columbus began in the Lehigh Valley just sixteen years after the Order was founded by the Venerable Servant of God, Father Michael J. McGivney. Founded in 1896, Trinity Council 313, Bethlehem, and Union Council 345, Easton were two of the earliest councils in Pennsylvania. Calvary Co
Read More...

Click on the link below to open handbook
Read More... 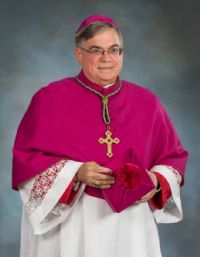 
Most Rev. Alfred A. Schlert


Bishop Alfred A. Schlert was born to Alfred and Marylou Schlert in Easton on July 24, 1961, and was educated at St. Jane Frances de Chantal Elementary School, Easton and Notre Dame High School, Easton. He prepared for the Priesthood at St. Charles Borromeo Seminary, Philadelphia, the Pontifical Roman Seminary, Rome and St. John Lateran University, Rome. He was ordained a priest at the Cathedral of Saint Catharine of Siena, Allentown on September 19, 1987 by The Most Reverend Thomas J. Welsh, Second Bishop of Allentown.

He served as a Parochial Vicar at St. Francis of Assisi Church, Allentown, as a Professor at his alma mater, Notre Dame High School, Easton and as the Catholic Chaplain at Lehigh University, Bethlehem. During his years at Notre Dame High School, he resided at St. Anthony of Padua Church, Easton, St. Bernard Church, Easton and Sacred Heart Church, Bath. He completed graduate studies at the Pontifical North American College, Rome and the Pontifical Lateran University, Rome where he received a Licentiate in Canon Law in 1992.

Pope St. John Paul II named him Chaplain to His Holiness with the title of Monsignor in 1999. Pope Benedict XVI named him a Prelate of Honor, the second highest rank of Monsignor, in 2005.