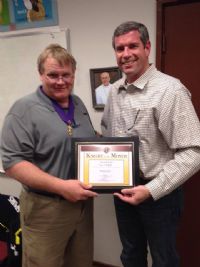 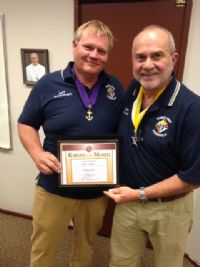 This month the Council honors Fr. Jim Fox our Parish Priest and Fr. Dennis Garrou our Parochial Vicar. With their assistance and continued support, our Council is thriving in support of Parish activities and charitable actions.

Knight of the Month - The Knight of the Month for March 2016 is Sir Knight Leon Lake. Leon’s leadership, and commitment to fraternal and religious actions such in two major events over the past few months (Men’s Retreat and the St. Patrick’s Day Celebration) continue to exemplify the dedication and charity exhibited by gentlemen of the council.

The Knight of the Month for March 2016 is Brother Knight Ian Cameron. Ian is proud to be a Knight of Columbus. He attends the monthly meetings, and is heavily involved in the Prison Ministry. Ian answers the call “To do something”. Congratulations Ian! 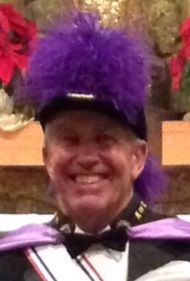 Knight of the Month for February 2016 is awarded to SK Mike Wells. Involved in many Council and Assembly activities, Mike continues to display excitement, enthusiasm and dedication.

The Knight of the Month for January 2016 is Brother Knight Mike Guest. Mike has become Mister Pancake Man for our Breakfasts. Mike also jumped right in with kitchen support during December’s Parish Breakfast. Congratulations Mike!

The Knight of the Month for December 2015 was awarded to SK Johann Wanner, Mike Cook, Richard White, and SK Peter Wajda. These five Knights’ were instrumental in the meal preparation and service of the successful 2015 KOC sponsored Oktoberfest 2015.

The Knight of the Month for November 2015 was awarded to SK Dave Lynch. SK Dave is a stalwart council member who can and is counted upon to provide various support roles to foster council events. Congratulations Dave! 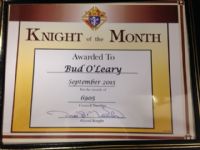 This month's Knight of the Month is an oldie but a goodie. He can be called that as he is older than the GK and has been a Council 6905 Knight forever. If you don't know who he is, just show up for a pancake breakfast and he is there. Congratulations Bud!! 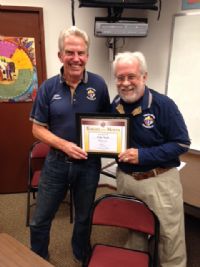 The Knight of the Month for September 2015 was awarded to SK Mike Wells. Mike was instrumental in the success of the recent Parish garage sale. Congratulations, Mike!

This month's Knight of the Month is the model for a new Knight. Already a 4th Degree, already in the Honor Guard (sword and all), already willing to fill an urgent request by the GK during the Officers' Initiation Ceremony, active in the Pancake Breakfasts, already active in .... Brother Knight Andy Lynch! 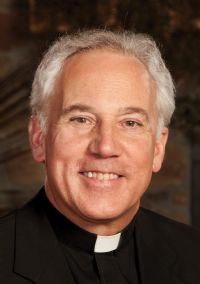 This month’s Knight of the Month is Fr. Dennis! Our Council is one of the few who is lucky and honored enough to have such a Priest in its Council. He only missed two business meetings and adds to every meeting he attends and is our connection with our Lord Jesus, our God. Thank you Fr. Dennis for all you do!

The Knight of the Month for May 2015 was awarded to Mike Cook. Congratulations Mike! Everyone recognizes the efforts and contribution made by Mike over the past months in a variety of causes and his willingness to accept the upcoming Council position of Financial Secretary in 2016.

The Knight of the Month for April 2015 was presented to Greg Houston. Congratulations Greg! Since receiving his first degree this past year, Greg has been active in many council activities and continues to volunteer for council supported events. Greg is a model of charity in action.

This month's Knight of the Month is always smiling, always greets fellow Knights and any other person he CAN. Speaking of CANS, he is Mr. 40 Cans for Lent. A true Brother and a faithful Knight, Pat Eskew! 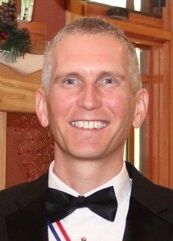 This month's Knight of the Month is a person who is a leader in this Church's Right to Life Program, he is also responsible for our new website, he volunteered for the Chancellor position knowing that in a few years he may be elected Grand Knight, and he makes quite a bartender: Colin Denvir 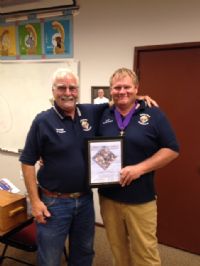 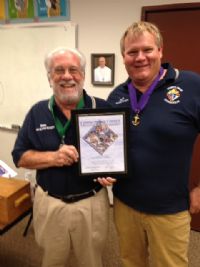 Family of the Month for April 2016 is awarded to Duane and Ann Chamot. A very active couple in Parish activities, Duane and Ann continue to exemplify the traits of selfless service to both parish and community. Both the Council and the Cor Marie Auxiliary are proud to have Duane and Ann as members. 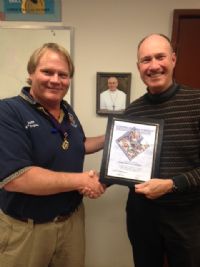 Family of the Month for March 2016 is awarded to SK Gregg and Suzanne Kapulka. Long time members of the Council and parish, Gregg and Suzanne have continuously exhibited all the traits of a Catholic Gentleman and Gentlewoman in service to the Parish, the Council, and the local community.

Family of the Month for February 2016 is awarded to SK Ken and Mrs. Suzanne Staab. A long time member of the Council, Ken and Suzanne have continuously exhibited all the traits of a Catholic Gentleman and Gentlewoman in service to the Parish, the Council, and the local community. May almighty God continue to protect and shine His graces upon you.

The Family of the Month was awarded Mike and Sue Zembrowski for their leadership in the “Keep Christ in Christmas” poster contest and their charity in providing all Religious Education Students with a wooden tree ornament of the Nativity. Congratulations Mike and Sue!

The Family of the Month was awarded to Brother Dave Trevathan and his wife Lynnda who accompanied the wife of the Oktoberfest accordion player to St. Anthony’s Hospital. Herman fell ill during the event and the Trevathan’s provided compassion and company. Charity has no bounds!

The Family of the Month was awarded to SK Pat and Sue Eskew. A couple that continues to demonstrate how two people can impact an entire council and parish. Pat and Sue where co-chairs of the recent and very successful Oktoberfest 2015. Congratulations, Pat and Sue! 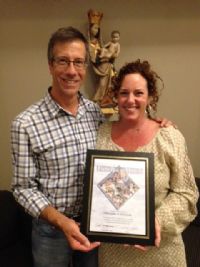 This family is a true example of an entire family being involved in their Church. This family includes two Alter Servers out of three boys, a newly degreed Knight, and a Co-Director of CTK's Religious Education Department. Congratulations to Chris and Erin Corbo!!

The Family of the Month was awarded to Deacon George and Arlene Fitterer. For continued service to the Christ the King Parish.

This month's Family of the Month goes to a family of two not counting dogs, a family that spent 16 times after Masses selling peaches, a family that is always there for Pancake Breakfasts (setup through cleanup), always doing the extra time to prepare foods for numerous Knights events as well as Parish events, there when the GK asks for snacks at the Scholarship Reception, there when asked by the GK to provide snacks for the Officer' Induction Ceremony, arranging peach ordering and delivery, tent setup, learned and modified use of square for credit card use, food for the volunteer Knights at peach delivery, a family that has made extra efforts anytime asked, attended meetings outside of Business Meetings at the request of Knight Officers, provided a vehicle for the Rodeo, helped get bottled water ready and loaded for delivery during the Evergreen Rodeo Parade, making table decorations, a family that has made extra efforts to with the the GK in developing positive relations with the Parish Staff and Parish Office, a family that has remained active for several years, and many other things, and yes, a family that has already been honored many times by the Knights...., yes, it is Suzanne and Gregg Kapulka!

Congratulations to Suzanne and Ken Stabb! Both are a common sight at events in the Church and our Knights. This is long overdue to this family 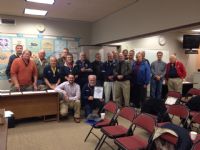 The Family of the Month was awarded to the Council's 'Pancake Breakfast Family.' A clear message to the Parish of CHARITY - UNITY - FRATERNATY in practice.

Congratulations to the Lake family! Everyone recognizes the efforts and contribution made by the Leon and Fiz in the organization of yet another successful St. Patrick’s Day Party.

Gregg and Suzanne Kapulka were also awarded the April 2015 Family of the Month award for continued service the Parish community. The Kapulka’s recent activity was the organization and participation in the 2015 Lenten Fish Bake dinners. Congratulations Gregg and Suzanne!

This month's Family of the Month are both singers, 4th year Biblical School students, a Past Grand Knight who is still active in our brotherhood. Yeah, it's Betsy and Frazer Lockhart!

This month's Family of the Month is rather unique. This person is a family of one, but when you add her extended family of Knights, she certainly qualifies. This person is active in the Knights at the Rodeo, helping Knights with any dinner event, and being proud to still be a part of the Knights and their activities: Vickie Jones