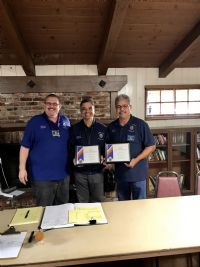 Brothers Robert Roberto and Juan Quezada were recognized for their hard work and making the 2018 Annual Installation Ceremony and Dinner a great success. Brother Robert once again did a phenomenal job by leading the committee as our Chairman! 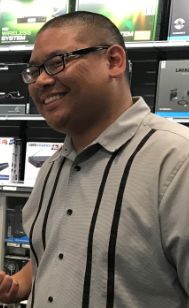 Brother Matt was recognized for his leadership and establishing the Audio/Visual Committee from the ground up and providing a great service to our Council. 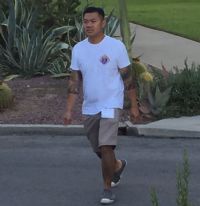 Brother Henry was recognized for his courage, faith and love for family - his immediate family and his Council 4581 family! Brother Henry will always be in our memories - may our Lord, Jesus Christ keep him close in His embrace and help our Brother prepare a room for us in our "New Council" in Heaven. 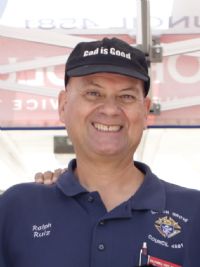 What can we say, but, "Thank you!" Brother Ralph was recognized for going beyond his duties of WFS, dedicating multiple hours of research and delivering clarity and order to several accounts and processes. 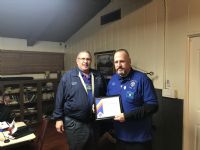 Brother Steve is the epitome of the "quiet" worker who comes in under the radar and gets the job done! Brother Steve was recognized for his dedication to service and charity reminding all of us of why we joined the Knights of Columbus!

Thank you Brother Paul for being the example to all of us at Council 4581 by dedicating endless hours of service to multiple ministries at Saint Columban Parish.

Brother Mike was recognized for taking the lead of our Council's Annual Intellectual Disability Drive (aka the ID Drive or Tootsie Roll Drive) and once again making it a successful event raising over $7,000 dollars. 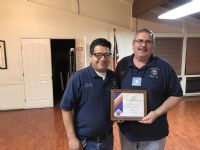 Brother David is our fearless Concession Director, who coordinates our Popcorn / Snow Cone events at Saint Columban Church. He is the first to arrive and the last to leave and without his commitment we would not receive half the amount of donations from our parishioners. Brother David was recognized for his ongoing dedication to this event.

Brother Juan was recognized for all he does as Membership Director and his ongoing support to do whatever is needed to make Council 4581 thrive and inspire Brothers to do their best in service to our Church. 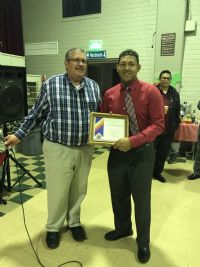 Brother Markus is a breath of fresh air with an endless amount of energy to motivate and inspire the rest of the Council. Brother Markus was recognized for his dedication to the service of others at Saint Columban Parish "and fellow Brother Knights! 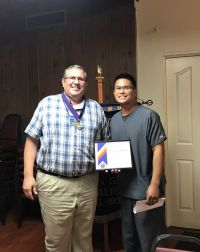 Brother Gary Padre was selected the Knight of Month for June 2018 for his dedication and hard work at various council events. Brother Gary and his sons lead our Council Brothers by not only handing out popcorn and snow cones to our Parish Community at Saint Columbus Church but also providied much needed energy and motivation. Thank you, Brother Gary! 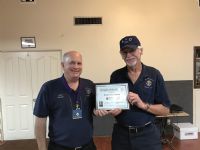 Brother Paul Runyan was selected the Knight of the Month for April 2018 for his hard work helping the Woman's Club of Saint Columban Church and for doing a phenomenal job as Chairman of the Annual Lady Knights Event. 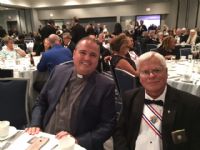 Brother Joe Rebelo was selected the Knight of the Month for March 2018 for his ongoing contributions to the Sisters of Saint Columban Church and to Father Rodrigues of Torre Dona da Chama, Portugal by donating over $1,500 dollars for altar server garments on behalf of Garden Grove Council 4581. 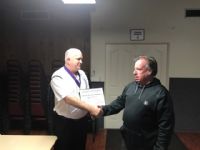 Brother Mike Madden, PGK was awarded the Knight of the Quarter (12/18/17) by our WGK John Hamtil for his dedication as Chairman for the 2017 People with Intellectual Disabilities Drive (aka Tootsie Roll Drive). Our Council, under the leadership of Brother Mike, collected over $10, 000 dollars in donations from Saint Columban parishioners (and visitors) to help support the families of people with intellectual disabilities. Great job, Brother Mike! 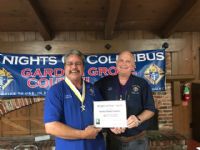 Brother Robert was selected the Knight of the Month for November 2017 for his multiple contributions: fabricating a metal stand to assist with the Church Pew Restoration Project, for donating the material for our Council's new shed and for the installation. Brother Robert is a great role model as he did these things without telling anyone. He may work silently "behind the scenes" but his love and dedication to answer our Lord's Call to Charity is clear for all to see. Thank you, Brother Robert!

Brother James was selected the Knight of the Month for July 2017 for helping the Sisters of Saint Columban Parish by taking care of the landscape outside of their Convent. Brother James did this on his own without telling the Council. Great job, Brother James for showing all of us how to answer our Lord's Call to Charity and doing it without the need to tell the world. 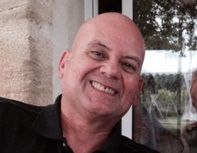 Brother Ralph was recognized as June 2017 Knight of The Month. Brother Ralph is the current Worthy Financial Secretary and 2-time Past Grand Knight of our council. Brother Ralph was an inspiration to our council brothers. He kept attending events and council meetings without showing the effects the illness of his mother-in-law had on him and his wife Lady Knight Ana. Ralph was the supportive husband as Ana traveled back and forth to care for and comfort his mother-in-law until the very end. We recognize our Brother for showing us how to be there for our family and be there for our "council" family.

Brother David Houston was recognized as the April 2017 Knight of The Month. Brother David took the leading role and successfully implemented a Popcorn / Snow Cone event for the afternoon masses. This helps the council reach out to more parishioners. 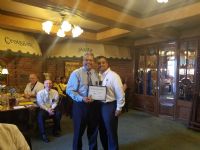 Brother Robert Roberto was recognized as March 2017 Knight of The Month. Brother Robert has a "quiet" demeanor but stands out among the brothers. He is consistently the first to arrive and last to leave an event. Brother Robert shows us how to help, how to be there without needing to stand out. He lets his energy and commitment speak for him. 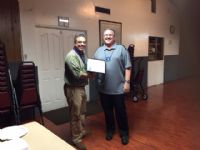 Brother Andrew Sabala was recognized as February 2017 Knight of The Month. Brother Andrew is an inspiration to all Brother Knights of Council 4581 because he has discovered a way to balance both is "family" life and his contributions to Council 4581. Thank you Brother Andrew for showing us the way.

Our Council's Worthy Treasurer and Past Grand Knight, Roy English, was recognized as December 2016 Knight Of The Month. Our Heavenly Father tells us to "honor our father and mother" and Brother Roy demonstrates this on a constant basis. Mr. English's health has been poor recently and Brother Roy has been there taking care of him. Yet, Brother Roy still finds the time to send out email reminders to the Council about upcoming events and fulfilling his obligation as Worthy Treasurer. Thank you Brother Roy for being a great example to us.

(L to R): WGK Juan Quezada and Retention Director (Brother) Joe Rebelo. Brother Joe was recognized as November 2016 Knight Of The Month. Brother Joe shows us how to answer our Lord's call to Charity. Brother Joe travels often to Portugal to take care of his mother. In November 2016, Brother Joe (and Lady Helen, his wife) donated money to purchase much needed garments for the altar servers in his childhood parish in Portugal. Brother Joe offered the thoughtful gift to the parish in the name of Garden Grove Council 4581.

(L to R): Worthy Warden Ray Carmona and WGK Juan Quezada. Brother Ray was recognized as October 2016 Knight Of The Month. Brother Ray is an inspiration to all of our Council Brothers. He shows us what "commitment" means by being there at our events, meetings or helping a brother move furniture with his truck all while helping his wife (Lady Frankie) take care of her ailing mother. Thank you Brother Ray for being a great role model to us and for being Frankie's "Knight in shining armor"! 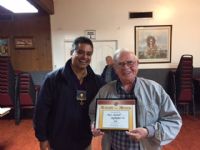 Brother Frank is the epitome of loyalty and devotion…an inspiration to all especially our Brothers of Council 4581. Brother Frank every Sunday…took the Holy Eucharist home to his sick wife. He never missed a mass. He attended every business and council meeting sharing his time as our Worthy Chancellor and as caregiver to his ailing wife. For his example, we honor Brother Frank – September 2016 Knight of the Month. Rest in Peace Evelyn Steinhoff (September 17, 2016). 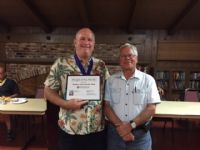 (L to R): WDGK John Hamtil and Retention Director Joe Rebelo. Our WDGK John Hamtil was recognized as July 2016 Knight Of The Month because of his great planning and leadership to make the 1st Annual St. Columban Summertime BBQ Series a success! 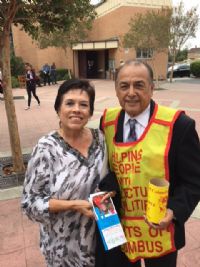 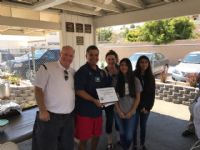 The Quezada Family (L to R) - Grand Knight John Hamtil, Brother Juan, Lady Trina, Sofia and Isabella were honored as the Family of the Month for August 2017. Our Council honored our Past Grand Knight (2016-2017) , Juan Quezada, for his leadership and hard work to help grow our membership and help us (together) to earn the Double Star Council Award for 2016-2017. Lady Knight Trina, Isabella and Sofia were also recognized for their support and understanding for sharing their dad with Council 4581.

The Nguyen Family (L to R): Brother Henry and Connie, (bottom row): Dylan and Sarah were awarded the Family of the Month for the period of February 2017 to April 2017. Their love of family and church is evident in everything they do. The Nguyens recently donated an air conditioner unit for the Convent at Saint Columban Church. They inspire us to be the best we can be individually and as a family. 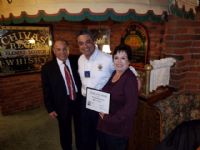 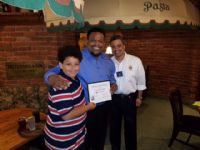