Congratulations to Brother Deacon Greg Bialis for his Ordination to the Permanent Deaconate.

The Knight of the Month for July is awarded to Jeremy Bright for stepping up to take over the Recorder role and completed the 6/23 Member meeting minutes for our June meeting before he got the position and he even got any formal training!

The Knight of the Month for June was awarded to Dick Schenk. Dick is the main force behind the Christ, Prince of Peace Senior Outreach. He also serves as our Council’s Pro-Life Director.

The March 2020 Knight of the Month award goes to Ron Jacober for a successful Blues Family Hockey Night. 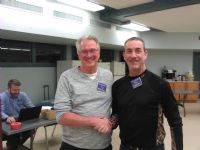 The Knight of the Month for February goes to Brian Cahill for his work with the Basketball Freethrow competition on January 10th. Family

The Knight of the Month for January goes to our Past Grand Knights and Expert party organizers Dan Brady and Pat Brennan for their exemplary planning and execution of our Annual Christmas Party, held this year at Rosalita’s. A great time was had by all.

The Knight of the Month for December is Rodney Schnurr for all of his work with Felice Cuores, especially at the December Christmas Party. Family of

The Knight of the Month for November 2019 is Bill Govern for his assistance with the Golf Tournament.

There are multiple Knights of the Month for October due to the busy schedule for the Council. For the Golf Tournament, Mike Shea for handling all of the registration duties, Neil Thole for the great pre-tournament lunch, and especially Kurtis Suellentrop and John Diderrich for the overall coordination and success of the 2019 CPOP KofC Golf Outing.

The Knight of the Month for August 2019 is Gene Weiss for his arranging for the delivery and spreading of the Mulch around the Parish campus. 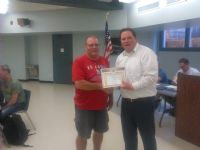 The Knight of the Month for June is SK Rodney Schnurr for donating a Beer Refrigerator/Freezer.

The Knight of the Month for May is Mike Shea for his exceptional coordination and organization of the Community Outreach Clean-up event and BBQ.

The April Knight of the Month award goes to Tom Henning for his excellent management of the cafeteria floor during the Fish Frys and for the 5th Sunday Family event Chris Cakes.

Rodney Schnurr continues to do a great job with the coordination of the annual KofC Basketball Freethrow contest. This year's contest was held on Friday, January 25th. There were 25 shooters ranging in ages from 9 to 14.

The December Knight of the Month award goes to our Past Grand Knights and Social Event Chairmen, Dan Brady and Pat Brennan for organizing a great Christmas Party at Hot Shots.

The November 2018 Knight of the Month is being awarded to Ron Jacober for his dedicated efforts in making the 2018 Winter Coat Drive a great success. Here are Ron along with John Diderrich, Kevin Cummins and Ron Huelsmann in front of the CPOP KofC Room at Cardinal Glennon Children's Hospital after delivering the coats

The October award for Knight of the Month goes to John Diderrich for his excellent work on the 2018 Annual CPOP KofC Golf Outing, Pictured here are John along with his team at the Golf Tournament.

The Knight of the Month award for September goes to Jeremy Bright for stepping forward to help make the 2018 Soccer Challenge and the CPOP Kickball Tournament a great success.

For the Month of August, Ron Huelsmann and Ryan McCarthy are being honored for their efforts and coordination that ensured a successful Solidarity BBQ that was held at Fr. Bob Gettinger's St. Augustine Parish for the members of his community.

For the Month of July the following Brother Knights are being honored for stepping forward at the last minute to become Insurance Members and thereby guaranteeing that the Christ, Prince of Peace Council would be awarded the Star Council Award for the 3rd Consecutive Year: Marty Hood, Dennis Hopman, Mike Lerch, Ryan McCarthy, Mike O'Keefe and Henry Saur

For Coordinating and running the food for Carnival - especially smoking the pork at home.

Chuck Gilbert was responsible for the successful "Breaking Down the Walls of Social Injustice Prayer and Gospel Concert that was held in April. 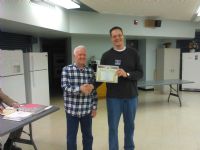 Fred Denny for his courageous battle with Cancer.

Tom Henning for stepping forward to coordinate all of the volunteer scheduling for the Lenten Fish Frys. This picture also includes Marty Hood for his September 2017 Knight of the Month Award for taking on the responsibility of coordinating the Annual Bob Chott Family Campout, and Mike Lerch for his Family of the Month Award for April. 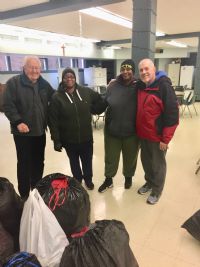 For his hard work and dedication with the Winter Coat Drive 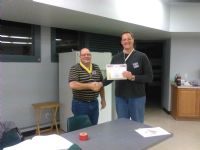 Marty Hood has stepped forward to take on the awesome responsibility of coordinating the annual Bob Chott Family Campout. 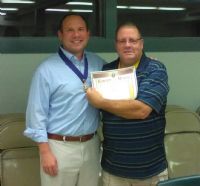 Rodney Schnurr has been involved with the Felice Cuores program for Developmental Disabled adults for many years. Every Christmas he becomes Santa Claus for the Christmas Party and he is there every month for Set-up, Clean-up, and as a Chaperone.

Scott Rogels has stepped forward to Coordinate the January and July Donut Sunday events that are hosted by the Christ Prince of Peace Knights of Columbus. 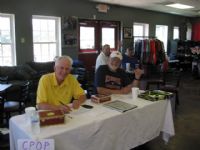 The June 2017 Knight of the Month is Jim Thole. Jim works behind the scene at the Fish Frys and at the Golf Tournament to ensure that all of the financial duties are taken care of efficiently

The May 2017 Knight of the Month was Chuck Gilbert for his efforts in coordination the 5th Sunday activities on April 30th, the 11:30 AM Mass and the afternoon concert by the Michael Latchison Singers.

The April 2017 Knight of the Month was one of our newest members, Bill Havrolka for his volunteering to help clean up after each of the Lenten Fish Frys.

The March 2017 Knight of the Month is Mike Shea for his efforts in coordination the February Meeting with our Guests from the Knights of Peter Claver to discuss "The Black Catholic Perspective on Our Faith and Social Justice.”

The February 2017 Knight of the Month goes to Brother Rodney Schnurr for his coordination of the successful Basketball Freethrow contest in January.

The August Family of the Month is awarded to Chuck and Cathy Gilbert for organizing and running the 5th Sunday Roasry via Zoom for the Christ, Prince of Peace Parish Community

The Family of the Month for July is the Wolak Family for generously and diligently helping to usher the 8:00 AM masses and clean the pews with their three sons, Neil, Ben, and Ryan.

The Family of the Month for June is the family of PGK Steve Winborn. Steve and his family attended the May Zoom Family Rosary from their home in Ohio. 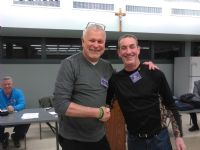 The December 2019 Family of the month Award goes to Chuck Kraemer and his wife Julie for their efforts, despite the scheduling problem, on the Tootsie Roll Drive.

The November 2019 Family of the Month Award goes to the Family of Ed Tumbarello for all of their efforts in making this year’s Soccer Challenge a success.

The September 2019 Family of the Month Award goes to the Jim Hill Family who took care of the set-up for the Formation and Knighthood degree that took place in the CPOP School Cafeteria. 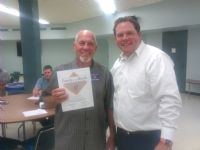 The June 2019 Family of the Month goes to Ron and Nancy Huelsmann for their continued work on the Archbishop’s Annual Appeal on behalf of the Christ Prince of Peace Parish and the Archdiocese.

The May 2019 Family of the Month goes to Ron and Nancy Huelsmann for their continued work on the Archbishop’s Annual Appeal on behalf of the Christ Prince of Peace Parish and the Archdiocese.

The April 2019 Family of the Month Award goes to Kevin Cummins, his wife Maria and son Nicholaus for their efforts in making the 5th Sunday of March Family event, Chris Cakes a successful family event for the Christ, Prince of Peace community.

Our October Family of the Month award goes to the Family of Jim Hill for their tireless effort in making the 2018 Oktoberfest a great success. 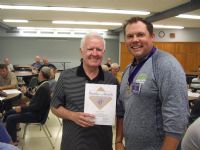 For the month of August 2018, Fred Denny and his wife Rita are being honored for their efforts associated with the Solidarity BBQ by providing a table of donated household and clothing items for the people of Fr. Bob Gettinger's Outreach.

For all of their help at the Carnival.

Mike and Mya Lerch for their dedicated service during the 6 Lenten Fish Frys.

Mark and Kathy Jansen for working on the Serving Line for each of the 6 Lenten Fish Frys.

For coordination the Annual Blood Drive

Henry Saur and his family are originally from Houston, Texas and still have family in the Houston Area that were affected by Hurricane Harvey. Henry and his wife Elana have organized a community-wide effort to purchase gift cards for the recovery effort going on in Houston.

Peter and his family are new to the Christ Prince of Peace community and to the Knights of Columbus. They are very involved in Community Service and the Parish Soccer Programs. 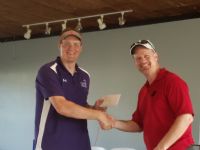 The June 2017 Family of the Month is the Family of our Chancellor and Membership Director, Kurtis Suellentrop. Kurtis is the chairman of the Golf Committee and he and his family works tirelessly to ensure that the Golf Tournament is a success.

The Families of Kip Underwood and John Gunn

The May 2017 goes to the Families of Kip Underwood and John Gunn for all of their hard work with the Christ Prince of Peace Parish Auction on April 30th.

The April 2017 Family of the Month goes to the Family of Brother Mike Shanahan whose children, Kelly and Mat Shannahan along with their friends have faithfully volunteered at the monthly Felice Cuores Events.

The March 2017 Family of the Month goes to Jim and Kathy Thole for their work with the Lenten Fish Frys.

The January 2017 Family of the Month is the Family of Brother Jim Hill for volunteering at the December Felice Cuores Christmas Party.