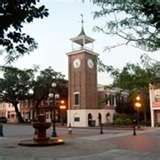 Locally, Greg R. Duffy recruited six men in 1946 to form a local council during a shrimp supper at the restaurant near the railroad crossing at Front Street. The restaurant owned by brothers Kelly & Louis Khoury would become the meeting place for the developing Knights of Columbus Council. Kelly, with years of experience as a Mess Sergeant in the US Army, served as a beloved and respected Lecturer for the Council and as well as assisting in many other special events in the community. The original charter, dated June 28, 1947 contains the names of 54 members, making it the fifth council in South Carolia.
Father John Steigner was succeeded as Chaplain by Father Albert S. Faase. For a time, meetings were held upstairs over Mahoney's Jewelry store, now Diana Shop. The Morgan Home and historic home of Georgetown's mayor (now St Mary's Rectory and Nursery) was bequeathed to St Mary's Parish, serving as the Convent for the Dominican Sisters of Adrian, Michigan, who staffed the first parochial school. Father Faase led the brother Knights in constructing additional classroom buildings and a garage. The knights held fundraisers through the annual local Mardi Gras to outfit St Mary's championship Drum & Bugle Corps, directed by Mr. W.W. Jacobus.
Council 3067 was known as the right arm of St Mary's. They assisted Father Vogel, who founded St Cyprians and Father O'Sullivan who was founder of Tara Hall Home for Boys, as well as lending support to Sarah Haven Home for Girls, Kidney Foundation and Association for Individuals with Mental Retardation. The Council Home, at 711 Highmarket Street, was built in 1960. Masses were held there during a year long renovation of St Mary's Church.
The Council House served the Knights for many years and many activities. It was a place for Knights and their families to meet and hold socials. In 2006 due to deteriorating conditions, the Council House was torn down and the property sold.
From the earliest days the Knights have volunteered numerous hours to help St. Mary's and St. Cyprian's Church. The Knights both then and now, can be seen building a garage, repairing, painting and sprucing up around the church and rectory or building much needed classroom at St Mary's School.
The Knights could always be depended on to assist with bazaars, dinners and raffles for worthy charities in the area. Communion breakfast traditionally served on the first Sunday of each month is a real treat for many families. The Knights have supported and continue to support the Pro-Life Movement. For many years Colin Peterson chaired the committee for the Georgetown area and worked diligently with other leaders to stand up for the lives of the innocent infants who are victims of legal abortion.
Over the years the Knights through fundraisers have given many thousands of dollars to local charities and the needy. The Dark Horse Drawing, Operation Hope (tootsie roll) Drives have and continue to help support the Joy School in Pawleys Island
Each year the local council holds a Memorial Mass honoring a deceased member. In the Mass the name of the deceased member is called twice, a fellow Knight responds with absent and places a red carnation on the pew of the church. The roll call brings to mind the faithful who have served and dedicated their life in service to the church and state.
One member that stood out was Joseph Miguel Ros. It was in the early 1980's that the name of the Council was changed to honor an exemplary Knight of Columbus, a devout and religious man, Joseph Miguel Ros. He joined the Knights of Columbus in Pascagoula, Mississippi, in September 1925. He served the council as Grand Knight and in 1927 was elected State Warden serving two terms. He was elected State Deputy in 1931. He transferred to Georgetown Council 3067 in 1948 and served as Grand Knight in 1954-1955 and in 1962-1963. Bishop Francis Reh honored him with title of Catholic Man of the Year. At death he was an honorary-life member of the third and fourth degree. He died on March 29, 1980 in Georgetown.
Through the efforts of a large group of dedicated men Council 3067 has came alive. It was then and still is to today THE STRONG RIGHT ARM OF ST. MARYS AND ST. CYPRIANS CHURCH.