4th Tuesday of the month at Mary Mother of God

2nd Tuesday of the month at Mary Mother of God

2nd Tuesday of the month at Mary Mother of God

This Council, No 14446, was granted its CHARTER from Supreme on January 1, 2008, (Feast Day celebrating Mary, Mother of God), to coincide with and honour the Parish to which it calls home, Mary Mother of God Church. But really its history begins with our founder Fr. Michael J. McGivney, on March 29, 1882, the date when the Knights of Columbus was granted its Charter. Through his foresight, this Order has developed into the foremost Catholic fraternal benefit society currently comprised of 1.9 million men and their families.

Mary Mother of God Parish, having recently moved from our temporary home of St. Marguerite d’Youville Catholic School, where we had celebrated Mass for some seven years, to our newly constructed “Church”, many men felt it would be appropriate if we tried to start our own Knights of Columbus council in the parish. The turning point came in the summer of 2007, after having received support from our parish priest, Father Charlie Jordan, when a group of men, already knights belonging to Marian Council, # 3881,started soliciting the support of men in the parish. Under the guidance of then District Deputy, Dennis Ross, the process began in earnest. With the dedication of Gerry Kupferschmidt, Henry Thissen and Milt Cowan and so many others, the phone calls, the talking to potential candidates, the collecting of Form 100’s, the dotting of “ I”s and crossing of “T”s we soon knew it was going to be a reality.

On December 6, 2007, an organizational meeting was held at the Church chaired by District Deputy, Dennis Ross. At this time our Fraternal Benefits Advisor, Mario Rodriguez was introduced to the new council members present. Mr. James Smith, New Council Development Director from Ontario State Council reiterated his own and “Congratulatory” remarks from Ontario State Deputy Nat Gallo.

On January 9, 2008, a 1st Degree was held in the Council Chambers of Mary Mother of God Church where the first of our newly admitted members received their “Degree”.

On January 22, 2008, Milt Cowan, Charter Grand Knight of Council 14446, held the first General Meeting of Mary Mother of God Council and the “Journey of These 48 Charter Members” began. 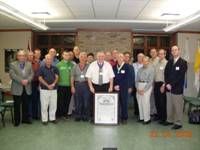 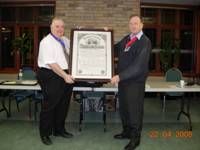 Other Council Appointments and Awards

KNIGHT OF THE YEAR:

FAMILY OF THE YEAR: