DUTIES OF COUNCIL OFFICERS
(Click on the "Council Officers Descriptions" link above to view the description for each Officer Position)
Since a more informed member will most likely prove to be a more active and involved member, every new Knight should be introduced to council officers and Service Program directors as soon after his First Degree as possible, and a brief description of the office or position should be made at this time.  The following descriptions may be used to introduce new members to the variety of Knights who serve the local council. 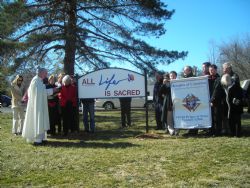 When the Christ Prince of Peace Knights of Columbus Council was created in 2001, there was a program in place at Christ Prince of Peace where our parish, through the St. Vincent DePaul Society, provided support to a Sister Parish, Immaculate Conception/St. Henry, in the inner-city.  This support included food and household contributions through a monthly Sharing Sunday program, The Adopt-A-Family program at Christmastime, and  the Garage Sale that was held at the local community outreach center three times a year.  These programs consisted of coordinated collections of food, household items, clothing, and other items at Christ Prince of Peace that would be taken down to the Community Outreach Center, by Christ Prince of Peace parishioners, caravan style.

In June of 2003, The Knights of Columbus were asked by the director of the Sister Parish Programs to take over the collection and transportation of the Garage Sale items.  One of our Knights, Paul Phillip, owned a small trucking company and he donated a trailer that could be used to collect and store the donated items. He also provided the tractor and driver to take the donated items to the Community Outreach Center.  Over the next 10 years, the Christ Prince of Peace Knights of Columbus collected and transported Garage Sale items each February, June, and October.  The Knights who were responsible for coordinating the collection, transportation, and unloading of the trailer were Greg Mathiesen from 2003 until 2008, Gregg Harris from 2008 until 2010 and Craig Berry from 2010 until 2013.

For the Fraternal Year of 2004-2005 The Christ Prince of Peace Council received special recognition from the State Knights of Columbus Council for an increase of 320% over the Annual Membership goal.