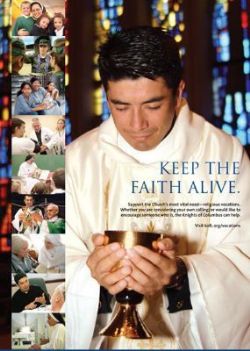 Thank you for your support

Through our RSVP Vocations Support Program Raffle and our Keep Christ in Christmas Button and Magnet Sales and your generous support, we are able to provide assistance this year to not one but two Seminarians!

A Higher Purpose
Keep the faith alive by supporting our seminarians and postulants. As the strong right arm of the church, the Knights of Columbus are committed to providing moral, financial and spiritual support to future priests and religious at all stages of their formation.

Overview
The Knights of Columbus stand in solidarity with our priests and religious. Through this program, council and parish families will raise funds to support seminarians in their area.  Though financial support is vitally important, it is not the only aspect of RSVP. Councils are also called to provide their “adopted” seminarian or religious aspirant with moral support and prayers for their success.

What is a Vocation?

Tidbit:  I did missionary work in Belize for two years.

What has been your favorite/most memorable story of your time at Mundelein thus far?

The Christmas Concert every year.

Tidbit:  My seminarian brothers laugh at me about this, but I love ALL things pumpkin. If the flavor was available year round, I'd enjoy it perpetually.

What has been your favorite/most memorable story of your time at St. Joseph thus far? 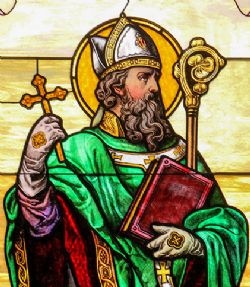 ST. PATRICK AND SEVEN OTHER IRISH SAINTS YOU SHOULD KNOW

Ask for the name of a saint from Ireland and most people immediately will mention St. Patrick. They might go on to explain how he used the three-leafed shamrock to explain the Holy Trinity and cite the legend of St. Patrick driving the snakes out of Ireland. But many would be hard pressed to identify another Irish saint.

As we prepare to celebrate St. Patrick’s Day on March 17 with parades, bagpipes and green beer (which they would never drink in Ireland), as well as tales of rainbows, leprechauns and pots of gold, let us look at the holy man and bishop, along with seven others associated with the Emerald Isle.

Although Patrick was not a native of the land — he was born in what is now England, in the late fourth century when it was part of the Roman Empire — he is one of the patron saints of Ireland. Kidnapped as a teen by Irish pirates and held captive for six years, he later returned to Ireland as a missionary bishop. His Confessions, relating the major events of his life, begins with a humble statement, “My name is Patrick, a sinner, a simple country person, and the least of all believers.” One of the holiest natural sites in Ireland is Croagh Patrick, a mountain where he fasted 40 days in imitation of Jesus in the desert. After laboring and preaching for 40 years, Patrick died in 461 and his remains are believed to be in Down Cathedral.

Although Patrick gets the accolades this month, we also pay tribute to a handful of other holy ones associated with the land of saints and scholars.

St. Palladius, also born in Roman Britain, preceded St. Patrick as a missionary to Ireland in 431, sent by the pope to serve as bishop to the “Irish who believed in Christ.” Apparently, the Christian faith had already been introduced to Ireland, probably by British merchants, refugees or slaves like Patrick. Palladius established at least three churches but did not remain long in Ireland. Feast day: July 7.

St. Brigid of Kildare, born in the fifth-century, established monastic institutions, one for men and one for women, and served as abbess of the latter. She is the second in veneration in Irish history, which is why Patrick and Brigid (and their variants) became the two most popular names in Irish Catholic families. Feast day: Feb. 1

St. Brendan the Navigator was a sixth-century priest who built a monastery near Galway that housed as many as 3,000 monks. As his moniker implies, he had considerable seafaring abilities and sailed to Scotland, Wales and France, sometimes founding new monasteries. Legend has him exploring the seas in search of the “Isle of the Blessed,” where his expedition encounters many fanciful creatures and historical figures before returning to Ireland. Some claim Brendan sailed to Greenland and the North American coast centuries before Columbus. Feast day: May 16.
St. Columba (Columcille) of Iona was a sixth-century monk who had artistic skills in illumination — the enhancement of a manuscript with highly decorative calligraphy, borders (marginalia), and miniature illustrations. He founded a monastery on the island of Iona, off Scotland’s coast, where his monks produced many beautiful illuminated manuscripts, the most famous of which is the “Book of Kells.” He, too, is a patron saint of Ireland. Feast day: June 9.

St. Aidan was born in Ireland and became a missionary bishop who preached in England’s Northumbria and founded the famed monastery of Lindisfarne, off the English coast. Known for his strict fasts and disciplines, he often walked from town to town, spreading the faith and renewing devotion among the people. Feast day: Aug. 31.

St. Oliver Plunkett, a 17th-century archbishop of Armagh and primate of Ireland, served during a time of intense persecution of Catholics under English rule. He was implicated in the “Popish Plot,” a conspiracy theory claiming that Catholics were scheming to assassinate the English king. He was arrested on charges of treason “for promoting the Roman faith,” faced trial in London, and condemned to death. He was hanged, drawn and quartered in Tyburn in 1681. Canonized by Pope Paul VI in 1975, he became the first new Irish saint in nearly 700 years. Feast day: July 1.

Blessed Columba Marmion, a 19th-century Benedictine abbot from Dublin, was a noted spiritual writer and retreat master. His spirituality was centered on the disciple’s status as adopted children of God through Baptism. “When God says to us, ‘Be perfect,’” Abbot Marmion wrote, “He knows all that He is asking of us, yet at the same time He requires nothing beyond our power, when we rely on His grace.” He died in 1923 and was beatified by Pope John Paul II in 2000. Feast day: Oct. 3.

May St. Patrick — and all the saints of Ireland — pray for us.

About the Author
Gerald Korson is a veteran Catholic writer and editor.

Catholic News Service has a rich history of journalistic professionalism and is a leader in the world of Catholic and religious media. With headquarters in Washington, offices in New York and Rome, and correspondents around the world, CNS provides the most comprehensive coverage of the church today

The Archdiocese of Chicago serves more than 2.2 million Catholics in Cook and Lake Counties in Northeastern Illinois, a geographic area of 1,411 square miles. The Archdiocese is divided into six vicariates and 31 deaneries. This local church is pastored by Cardinal Blase J. Cupich, assisted by six Episcopal Vicars, each responsible for a vicariate (region).

A prayer for “Renew My Church”

O God of all the nations,

the One God who is and was and always will be,

in your providence you willed that your Church

be united to the suffering of your Son.

Look with mercy on your servants who are

persecuted for their faith in you.

Grant them perseverance and courage

to be worthy imitators of Christ.

Bring your wisdom upon leaders of nations

to work for peace among all peoples.

May your Spirit open conversion

for those who contradict your will,

that we may live in harmony.

Give us the grace to be united in truth and freedom,

and to always seek your will in our lives.

Through Christ our Lord. 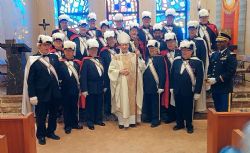 Thanks to Knights of Columbus and Lieutenant Colonel Robert Moore, United States Army for playing TAPS at the end of Mass today at All Saints Cemetery in Des Plaines,Il.